The national conversation on guns that so many have been calling for took a step forward tonight in Columbus, Ohio, as a panel fielded questions during a televised “National Town Hall” on the Newtown, Conn., massacre. 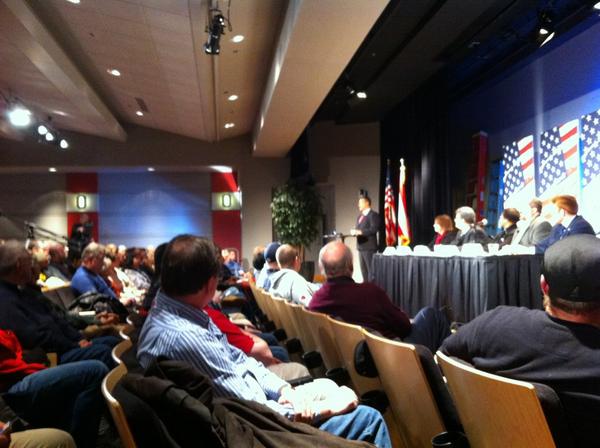 Tweets from the scene, though, suggest that it will take more than a single “heated discussion” to find common ground. Here’s a sample of what was said.

Audience member: says he stopped a mass murderer in Ashland in ’95 with his gun. Got cheers from audience. #nationaltownhall @wsyx6

Discussion turns back to guns. #nationaltownhall Talking about arming teachers. Participant says bad idea, b/c guns can be misplaced. @wsyx6

Buckeye Firearms Assoc says it will underwrite the cost of arming teachers in schools. If schools want it @wsyx6 #nationaltownhall

#nationaltownhall Let teachers carry voluntarily, school is then no longer unarmd victim zone; deter criminals who fear failure most of all

Great, another crazy lunatic complains he can’t teach kids right from wrong because he can’t hit his kids #NationalTownHall

Host question: does our culture contribute to gun violence? Nearly everyone here agrees it does. #nationaltownhall @wsyx6

Panelist to gun supporters: this country is asking you to come to the table for reasonable discussion about these issues. #nationaltownhall

High School Fashion Back In The 60s

So what do you all think? Has cursive writing outlived it’s usefulness? I don’t use it anymore, but I still know how.