President Obama had a fiscal cliff meeting with governors today. 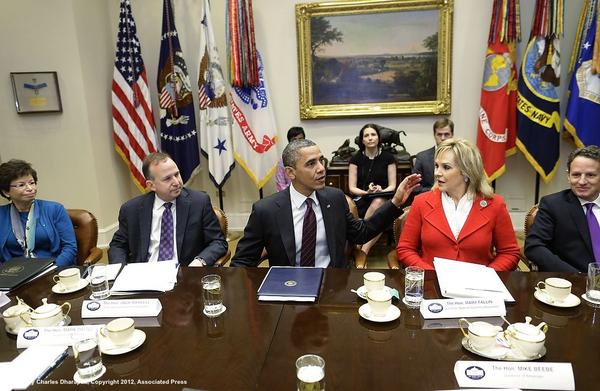 And NBC reporter, Kelly “Precious Heart” O’Donnell noticed one thing: President Obama totally sat next to a girl! OMG, he almost touched her shoulder, too! He must heart women or something. What meaning was behind this, she wonders? As do some of her fans.

@kellyo Not a gesture, we know where he stands with women, message yes, he trusts women.

It’s a hidden message of trust in women! Except for, you know, when he believes they are helpless and hapless Julias who must be tethered to the government.

@kellyo could be Gov Mary Fallin is vice chair of NGA, Gov Markell is the chair

Don’t be silly! A woman doesn’t warrant a thing on her own merits!

Leave it to a lapdog, especially a female one, to only see lady parts and instantly assume some hidden message because a governor happens to be a woman.

This Tiny Girl Looked Pregnant, But The Truth Had Her And Dad Going Under The Knife

When You Have A Paper Due The Next Morning

Carney: ‘Protests not directed at US, Obama or policy’; blames film