At least two fatalities have been reported following a shooting at Accent Signage Systems Inc. in Minneapolis’ Bryn Mawr neighborhood. KMSP, Minneapolis’ Fox affiliate, is also reporting that at least four people were wounded, with three in critical condition. The shooter, who had been fired this morning, is among the dead:

A high-ranking law enforcement source confirmed to FOX 9 that the shooter arrived at the office Thursday afternoon after being terminated from his job that morning.

That source says police have information indicating he may have been targeting specific employees. The shooter was also known to police prior to Thursday’s incident.

Shortly after 5:30 p.m. police found the shooter dead of a self-inflicted gunshot wound in the corner of the basement. It took about 30 minutes for SWAT and Minneapolis police to methodically search the building as they secured the scene outside.

We will continue to monitor this story and bring you updates as they come in.

neighbors of workplace shooting say they heard 5 to 7 shots

Still a lot of officers on scene 2 hours after work place shooting in Minneapolis. Waiting for more info from police. pic.twitter.com/pThh5YIf 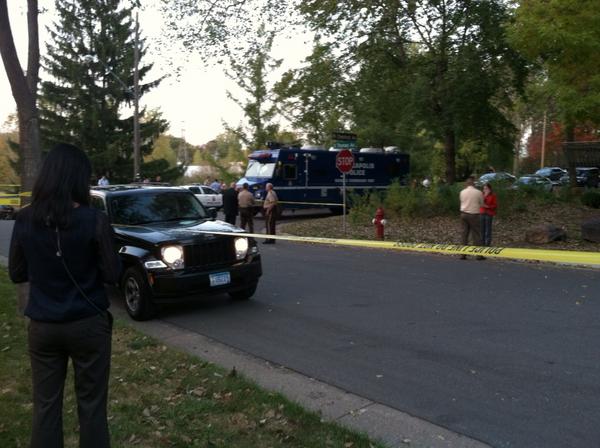 Twitterers in Minneapolis and beyond sent out their prayers:

Awaiting news on Minneapolis shooting- this violence has got to stop. Join me in prayer for the victims.

my thoughts & prayers go out to the people & families of those who were involved in the Minneapolis shooting today.

Prayers go out to the victims of the shooting in Minneapolis

Oh shit a shooting in Minneapolis…. good thing i live in the suburbs 😀 but really i pray for the victims and there family's R.I.P.

Thoughts and prayers go out to my homeland "@PioneerPress: Minneapolis police are at the scene of a reported shooting. http://t.co/YCFYEqN3"

scary stuff when you hear about a shooting when you're so far away from home! hope everything is okay in mpls. http://t.co/bJQ7vuPR

So a shooting happened today in an office in Minneapolis. 2 are dead and 4 wounded. Praying for the victims.

Our thoughts and prayers are with the victims and their loved ones.

The gunman killed four victims before taking his life.

Minneapolis Police: 5 people are dead including the gunman in the workplace shooting from this afternoon. 4 others were injured.

Police say the gunman who opened fire inside a Minneapolis sign-making business killed four people before fatally shooting himself.

You Probably Do This Every Day And You’re Just Making Yourself Look Silly.

Love Is Like Two People Pulling A Rubber Band…