Gov. Asa Hutchinson said he will allow the bill to become law, thereby preventing cities and counties from passing ordinances designed to protect LGBT people from discrimination in housing, jobs, and businesses. 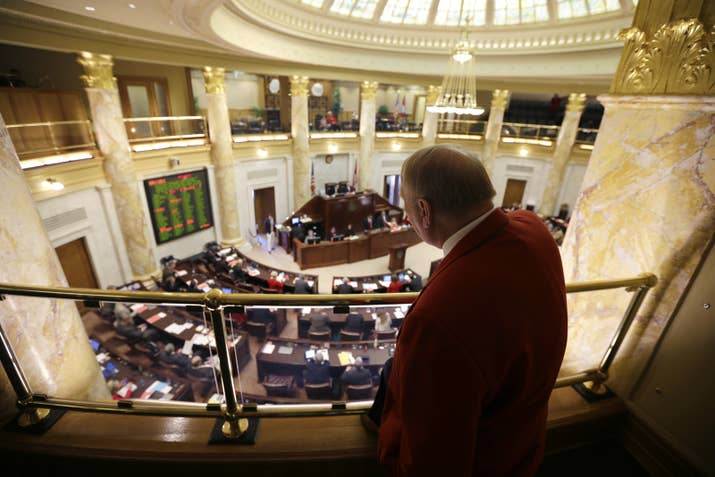 The Arkansas legislature gave its final thumbs-up Friday to a bill that will block cities and counties from enacting antidiscrimination laws that protect LGBT people.

The Arkansas House of Representatives voted decisively, 57-20, for SB202, with seven members voting present. Having already cleared the state Senate Monday, the bill now heads to the governor’s desk.

Gov. Asa Hutchinson told BuzzFeed News in a statement he will let the bill take effect. By neither vetoing nor signing the legislation, he said, “I am allowing the bill to become law.”

The bill’s sponsor, Republican State Sen. Bart Hester, told BuzzFeed News this week that he sponsored the measure to create consistent policies across Arkansas that will attract business, and because he was infuriated that cities were attempting to expand civil rights laws for LGBT people.

“This bill creates uniformity for business, and citizens for that matter, so that our employment laws will be the same throughout the state,” Republican Rep. Bob Ballinger, the bill’s House sponsor, said before today’s vote on the House floor. “There are some things on a statewide basis we deal with all the time, such as murder and fraud — a variety of things that need to be uniform,” he said.

But Rep. Clarke Tucker, a Democrat, blasted the bill as a “proactive act of discrimination.”

Tucker also challenged the premise that it was good for business, pointing out that the vast majority of Fortune 500 companies protect LGBT employees and may avoid moving their businesses to Arkansas.

“If we pass this legislation,” Tucker warned lawmakers, “we will be sending a message that we are out of step with corporate culture today in 2015.”

The bill appears to be part of the state’s pushback against LGBT rights, as courts have expanded same-sex marriage rights and the Supreme Court takes up the issue this year.

Also on Friday, the Arkansas House passed a religious freedom bill, which now advances to the state Senate. The act would prevent any state action, including a law, from burdening a person’s religious belief, even if that belief is indirectly connected to the person’s faith.

While some proponents argue the religious-freedom measure is needed to prevent government from trampling people’s moral conscience, LGBT advocates say it would let businesses turn away customers — a trend becoming more commonplace when LGBT customers attempt to buy floral arrangements or cakes for same-sex weddings.

Rep. Mary Bentley seemed to confirm an interest in refusing service when she explained her support for the discrimination bill.

Bentley told lawmakers she is worried about “little businesses out there, a baker or a pastor … that hold a conviction that says gay marriage is wrong.” She added, “That is what we are talking about today.”

“We should be honest and truthful — we like to beat around the bush up here,” she said. “I am concerned about things happening across our state.”

After emphasizing that LGBT stands for “lesbian, gay, bisexual, and transgender,” Bentley said from the lectern, “A baker who loves the word of God … should not have his or her business destroyed if someone who is transgender is trying to marry somebody else.”

“I am a Christian in the United States of America,” she continued. “It’s time to stand up and say enough is enough. They can do what they want to do, but we don’t have to destroy a business. I think it’s time that business owners have rights as well.”

As the bill’s sponsor, Hester told BuzzFeed News earlier this week that religious business owners should be allowed to fire employees for being gay.

Hester also said no businesses requested the measure — “I just chose to do this bill on my own will,” he said — and could not name any business associations supporting the bill. “In our world if they are not opposing you, that is almost a sign of support,” he explained.

Not only preempting antidiscrimination laws for LGBT people, the bill covers any local expansion of civil rights not covered under state law. “In targeting LGBT people, they have cast a wide net and prevented protections for a wide variety of groups,” Holly Dickson, the legal director  of the ACLU of Arkansas, told BuzzFeed News earlier this week. That net, for example, could ensnare students and veterans.

She said the bill is “designed to permit as much discrimination as possible in the state.”

The city council of Fayetteville, Arkansas, passed an LGBT antidiscrimination bill last summer that voters narrowly repealed in December. When politicians there suggested reintroducing the law, Hester, who supported the repeal campaign, introduced his bill to override Fayetteville and other jurisdictions that attempt to pass similar laws.

Explaining conflicts about the bill, Gov. Hutchinson released a statement saying that he would neither veto nor sign the bill — thereby allowing it to take effect. “I recognize the desire to prevent burdensome regulations on businesses across the state. However, I am concerned about the loss of local control. For that reason, I am allowing the bill to become law without my signature.”